It was midnight — pitch black — and I was descending a steep hill on my bicycle without a light. I had been fortunate so far; there had been ample streetlights. Now, however, as I hit the sharpest incline, the last streetlight faded behind me, and I hurtled down, squinting to pick out the white dashes in the center of the road. I wasn’t worried about cars; they would have headlights, which would solve my problem. My concern was going off the road and getting intimate with a sturdy pine tree. The periphery of the road was thick with them. In addition to all the other hazards, the road had sharp curves.

I was reluctant to slow down; I wanted to use the momentum to save energy. I’d already biked from 217th & Stark to 92nd & Division (more than seven miles) to catch the last train to Clackamas. By the time I got there, most of the buses had stopped running, so my only option was to bike another six miles home. It had already been a full day, with various other bicycle trips and assorted exertions. So I sped down the hill at least twice as fast as was advisable. My hair stood on end as the white center line disappeared from view. This might have been fun if I’d paid $20 and were eating popcorn and enjoying it with friends. But I was all alone. I uttered a quick prayer, and soon the lights from Highway 212 began to illuminate my way again. 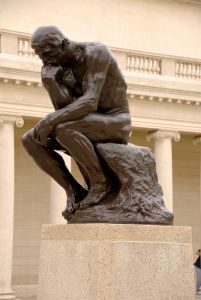 The experience was jarring enough to get me thinking. What I had just done — speeding into the unknown — is exactly what most people do in this life. Oh, we think we know where we’re headed in life, sort of. We read the newspapers, seek advice from our parents and trusted friends, and so on. But most of our informed decisions have to do with jobs, careers, consumer choices, health care, politics and other things  concerning our material lives. We’re not so good at addressing the crucial questions: Why am I here? What is the meaning of human existence? Is there a God? Does he expect anything from me? Why do I consistently hurt other people (and myself) in my quest for personal satisfaction? Where will I go when I die?

These questions are generally ignored by the world. Even when they are addressed, the answers usually fail to influence our major decisions in life, as though we weren’t really driven by our intellect but by something irrational we have made a habit of ignoring.

This hurtling into the unknown is the rule rather than the exception in this fallen age. It happens to individuals, families, organizations and nations. The worst of it is that we have the means to illuminate our way, but if we used it, we’d have to look at all kinds of slithery things that have collected in the darkness. We would have to surrender to our Maker. 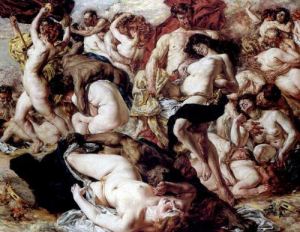 This isn’t a fable. The darkness I’m talking about isn’t out-and-out ignorance; it’s more deliberate than that. What I am referring to is idolatry: sensualism, materialism, self-righteousness, customized Christianity, secularism, and a thousand other God-replacements. All of them spell disaster, but the come with tasty concessions along the way, and they permit us to maintain the illusion of control while we purse the singular idol of self-sovereignty. This is the history of modern America in a nutshell. We’ve chased our fantasies until we’re falling apart, and we’re still not ready to admit defeat. We still have Blazers games to attend, vacations to take, larger houses to acquire, Pizza Hut and Ben & Jerry’s to eat. If we have a comfortable enough home with a state-of-the-art home entertainment system and a refrigerator full of food and beer, we can silence that vague feeling of impending doom — if we’re one of the unlucky ones. Somewhere an ancient sage whispers to us that it’s all vanity, chasing after the wind, but we shake him off like a gnat and cram another Hershey bar into our mouths. 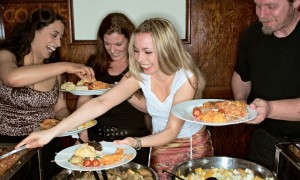 You’d think consumerism would lose its appeal with all this going on. But it doesn’t. We’ve forgotten that there is such a thing as real gold and spend our time collecting all the iron pyrite we can get our hands on. The end has started, but most of us tell ourselves it’s not that bad. With our creature comforts intact, we don’t have to acknowledge reality. Yet.

But the signs are everywhere. Our population has been emasculated by government coddling and a media that has trained us to believe we are all victims of poor upbringing, psychiatric disorders and right-wing conspiracies. There are no more good causes — none of any consequence, at any rate. All the successful social movements have been reduced to a game of musical chairs on the deck of the Titanic. Mainstream activism is essentially a collection of snarling dogs fighting over a dwindling pile of raw meat. Instead of addressing the real issues ― money in politics, the poisoning of our food and diminishing national sovereignty (among others), people and political groups attack each other as all of us — black, white, Democrat, Republican, gay and straight — swirl around the drain like plastic toys left in the bathtub.

America is dying. Gangrene has set into all the major organs: the family, education, law, art — even the Church, in good measure. Social Security, Medicare and Food Stamps are the food of cannibals. What is killing us? Debauchery, narcissism and most of all, godlessness. Atheists will tell you different, but then they’re still trying to make a meal out of spoiled meat. There is no more government, only international financiers and their employees in the White House, Congress and the Supreme Court.

I suppose America has to die; it has been the hope of the world for the last few centuries, which has only postponed the inevitable. Even before its moral free-fall, Christianity in America had crystallized into a hawkish nationalism without much real reverence for Christ. These are growing pains. We were never supposed to derive our hope and motivation from earthly kingdoms. As much as we want to find security and permanence in them, great people, nations and cultures are all under sentence of death. The ugliness and chaos that rules the hour need not threaten us unless we resist God.

Am I saying that everything in America is rotten? Not by a long shot. We still have a roaring economy and a great infrastructure. God is still at work here, and many Americans still live healthy, robust and scrupulous lives. But it doesn’t have anything to do with America, per se. The good things taking place here positively clash with what is going on in the national picture. American culture has become the enemy of godly people, and the government the enemy of us all. Some have predicted a great revival, and I pray for it. My hope is that people will stop trying to fix America and focus instead on what God is doing in the hearts and souls of people. This is what scripture calls “the kingdom of heaven.”

This isn’t a lament. It’s a sounding of the horn. A different country is calling. It is a heavenly one, like none that has ever been seen, but it is real and it has existed all along. It is a vast, blessed place, full of love, joy and peace, and there is room there for everyone who wears the mantle of Christ Jesus.

“Look! God’s dwelling place is now among the people, and he will dwell with them. They will be his people, and God himself will be with them and be their God. He will wipe away every tear from their eyes; there will be no more death or mourning or crying or pain, for the old order of things has passed away.” -Revelation 21:3-4

I am a freelance writer by trade, philosopher and comedian by accident of birth. I am an assiduous observer of humanity and endlessly fascinated with people, the common elements that make us human, what motivates people and the fingerprint of God in all of us. I enjoy exploring the universe in my search for meaning, beauty and friendship. My writing is an extension of all these things and something I did for fun long before I ever got paid. My hope is that the reader will find in this portfolio a pleasing and inspiring literary hodgepodge. Good reading!
View all posts by Douglas Abbott →
This entry was posted in the kingdom of heaven and tagged America, call to the faithful, consumerism, death, debauchery, decline, destruction, end of the age, fools gold, godlessness, growing pains, hedonism, idolatry, Kingdom of Heaven, materialism, meaning of life, narcissism, national sovereignty, nationalism, secularism, sounding of the trumpet. Bookmark the permalink.