I’ve had an article nearly completed for about a week, but I can’t finish it. The part that is holding me up is what I call the “heartswell” portion. I can’t write these parts unless my own heart is swelling with the memory (or direct experience) of what I’m trying to describe. I can fake it, but then I will have failed to move the reader, which is why I write to begin with.

My heart isn’t swelling with much of anything right now. I won’t go into the reasons why. Suffice to say that I’m on auto pilot at the moment, tending to the bare necessities of life. I’m okay with this. I know it isn’t permanent. God is sovereign, and he has firm intentions to bless me and shepherd me through the thickets of my earthy travail. That is the end of the matter.

My confidence in God’s grace and forbearance has come slowly and with much difficulty. For most of my life, I believed that Christianity was a task-oriented enterprise rather than a relationship. (Forgive me for uttering a buzzword, but there is no better way to put it.) Having said this, I have to clarify that there are some crucial tasks laid out for the Christian. Among them is to obey God. However, I have come to believe that obedience and service are secondary to the relationship, which is established unilaterally by the blood and hence has nothing to do with our conduct.

Most followers of Christ can remember a handful of moments during which they made life-altering  discoveries ― epiphanies in which God’s truth penetrated their hearts. For me, one of these came while I was sitting in a Teen Challenge chapel service. The pastor, Ron Wenning, was speaking on the meaning of self-denial. For me (and no doubt many others), the imperative to deny myself brings thoughts of terrible pain. When I am told, “Deny yourself,” I react as though I had been told, “Put your hand in a fire and hold it there.” But Pastor Ron’s instruction was soothing. He said, “To deny yourself does not mean to choose against your own preferences. What we are being told is to disavow ownership of our own lives ― to cultivate a heart attitude of surrender by saying to ourselves, ‘My life is not my own. It belongs to Christ.’” He went on to expound on the power of verbal confession to change the heart and, in time, everything else.

Notice the progression here: through the act of confession, between the first verse and the second, the posture of the heart has moved from second place to first. I don’t know about you, reader, but for me, this is absolutely revolutionary. I have agonized over the dessicated, rebellious condition of my heart. But now I discover that God has given me a weapon against my depravity: confession. It isn’t easy to do, at first. When I began to speak of God’s love for me, his faithfulness, my destiny in Christ, and the uncomfortable notion of his ownership of me, it tasted like topsoil in my mouth. But as I did it more and more, I found that the things I was asserting had begun to work their way into 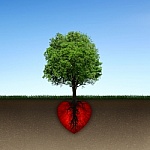 my heart. Ideas that were prickly and foreign to my own inclinations began to seem right to me once I began speaking them in faith. “Faith” in this context was of the Hebrews 11 variety ― embracing something that, according to everything I could apprehend with my human faculties, didn’t exist. Through such impartations God moves us from our self-propelled religiosity onto the footing of relationship, which is where the power is.

How crushing our Christian duties can seem at times! But it is interesting to note that first-century church leaders, when they were sending out letters to new converts, had this to say: “It seemed good to the Holy Spirit and to us not to burden you with anything beyond the following requirements: You are to abstain from food sacrificed to idols, from blood, from the meat of strangled animals and from sexual immorality. You will do well to avoid these things.” (Acts 15:28-29) As amazing as it sounds to us who have been raised in the constraints of a fleshed-out Christianity, liberty was an integral element of the gospel. Otherwise, Paul would not have had to point out to the Corinthians, “’Everything is permissible.’ But not everything is beneficial.” (1 Co. 6:12) When Jesus was asked about the requirements of God, he answered simply, “The work of God is this: to believe in the one he has sent.” Even back in ancient times, the Lord (who had a reputation for incinerating non-compliants) told his people,

He has shown you, O mortal, what is good.
And what does the Lord require of you?
To act justly and to love mercy
and to walk humbly with your God. (Micah 6:8)

Could it be that God’s grace is so magnanimous that it can withstand being misused for the purpose of self-indulgence? Indeed, and God made provision for this as well; we have the counsel of Scripture, the exhortation of fellow believers, and the bite of sin’s natural consequences to steer us back to obedience. Concern about the outcome of disobedience may not be the noblest reason to obey God, but it is a perfectly valid one. Paul alludes to such an incentive in his statement, “…but not everything is beneficial.”

Most of all, however, God longs for his children, when their spirits have been refreshed by the extravagance of his grace, to say, “God has been good to me. I want to please him with my choices.” Such a sentiment makes no sense until the Christian has become convinced God loves him and begins to identify the countless ways God has blessed him. “The whole earth is full of his

glory” (Isa. 6:3). That glory is many things: beauty, marvelous craftsmanship, intricacy and gargantuan releases of energy. Most of all, that glory is God’s love expressing itself every second of every day, if only we will look for it. Right in the swamp of sin’s residue, the creation explodes with blessings intended personally for us ― in the words of Pat Conroy, “like a love letter from God.”

I am a freelance writer by trade, philosopher and comedian by accident of birth. I am an assiduous observer of humanity and endlessly fascinated with people, the common elements that make us human, what motivates people and the fingerprint of God in all of us. I enjoy exploring the universe in my search for meaning, beauty and friendship. My writing is an extension of all these things and something I did for fun long before I ever got paid. My hope is that the reader will find in this portfolio a pleasing and inspiring literary hodgepodge. Good reading!
View all posts by Douglas Abbott →
This entry was posted in Grace and tagged blessing, confession, discovery, divine, enlightenment, grace, growth, law, legalism, liberty, license, love, patience, power, speech, stream of consiousness, truth. Bookmark the permalink.

2 Responses to Stream of Consciousness