“I have read in Plato and Cicero sayings that are very wise and very beautiful, but I never read in either of them, “Come unto me all ye that labor and are heavy laden.” –St. Augustine

I am truly blessed. I am swaddled in the embrace of Almighty God, who watches over me with untiring patience and compassion. My Father is generous and kind. When he withholds comfort or material prosperity from me, it is for my good. I praise him for tending to my spirit above my temporal life, always and resolutely. He is a passionate lover and a faithful friend. My prayer is for humility, patience and grace to trust my Savior no matter how my flesh howls in the throes of fiery trials. I entrust my life and being to you, Lord Jesus. The colossal sacrifice you made for me has purchased my redemption and won my trust and devotion.

It’s amazing how my heart swells after a morning such as I spent earlier today, when I went with some of my friends and church fellows to downtown Portland. We spent 35 minutes bagging 250 lunches and then began handing them out along Burnside street, where Portland’s homeless community is concentrated, near the Union Gospel Mission and other homeless outreaches. There, even with all the shelters in the area, people lie curled up in doorways trying to sleep off disaster. Or they shuffle about with eyes that look as though shutters have been pulled behind them. Many are wearing futility and bitterness like a garment, but others are cheerful and grateful to receive a meal. All of them accept our offerings without particular surprise, as though they know that we are but middlemen, and our daily provision comes from an invisible Source. And so it does.

I didn’t create any of the food, clothing or personal possessions I enjoy, and I didn’t give

anything but my time this morning. All the sustenance we distributed (bringing us to a grand total of 2800 lunches given out over several months) has come from an initial gift of $100 that has been parleyed into this community outpouring. This was done by investing the initial gift into supplies for crafting handmade crosses, which were all sold for $5 apiece at church services and the money re-invested. Now we’re both building crosses and bagging lunches, and still the small initial investment grows, even as it is being distributed. There is something magical about this that reminds me of five loaves, two fish and a famished throng in a Middle East field 2000 years ago.

Reader, forgive my flamboyance, but I’m on one right now. God is giving me a great big hug, and I can’t contain my joy! Can it be that just spending a few hours tending to homeless people makes the Father so happy? Yes, I believe it does!

While we were passing lunches out, I had a conversation with our organizer, Lance, who told me about past homeless outreach events with an exuberance most people reserve for Caribbean cruises. He related a story to me about a man named Charles Moore, a heroin addict for 20 years before hearing the call of God. When the call came, Moore was living in a cardboard box in Roseburg, Oregon after having been kicked off a Greyhound bus headed for San Francisco. On the day it happened, Moore sat shivering in his box, suffering terribly from withdrawals, listening to the rain hitting the ground. Suddenly, he cried out to God: “Lord, if you will come and set me free from this awful addiction, I’ll give my life to you.” He testified later that Christ the Savior himself came and sat next to him on the damp ground, touched him and told him, “You are free!”

Moore took Jesus at his word, cleaned up, hitchhiked to Eugene and lived in Liberation House, a Christian shelter for men, for three years. After meeting and marrying his wife, Karen, the two moved to Vancouver, joined Crossroads Community Church and began serving chili to homeless people in downtown Portland in 1989. Seventeen years after hearing God’s call, Moore founded the Liberation Street Church on Burnside Street, next to 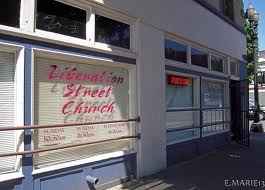 the Union Gospel Mission. His ministry was centered on those who lived as he had for 20 years: homeless, alcoholic, drug-addicted, hopeless. The world never seems to run out of them, but because of ministries like Moore’s, there are many places for them to find a clean, dry place, a meal and words of hope.

Moore died of emphysema in 2011 and was honored by his flock and many in the Burnside community who remembered his warmth and fierce faith. Among them was Tony Betker, pastor of the Liberation Street Church of Washington, which Moore helped to establish. The wake was summed up on a sign at the church entrance which read, “Pastor Charles’ Goin’ Home Celebration.” The turnout was significant for such a small church.

“It’s pretty overwhelming to see all of the people my dad touched,” said his daughter, Hilary, who was in tears during the service. 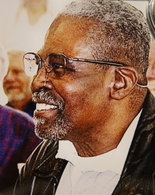 Moore won the hearts of the Burnside community by loving “people who were unlovely,” said Mike Maksimowicz, former director of the Portland Rescue Mission. The church often took homeless people on trips to the Oregon coast and set out great spreads for Christmas, Easter and Thanksgiving. Moore was affectionately called “the Bishop of Burnside” by those who frequented his worship services and holiday celebrations.

Moore’s church lives on, doing regular outreaches right there in the thick of Portland’s homeless community. I was there for several of them during my time with Teen Challenge, before its Portland Metro Center moved to Oregon City. At one time, we went weekly to the Liberation Street Church, handing out coats, hats and blankets and ladling spaghetti onto plates for the Sunday evening event. After the food was all gone, the Teen Challenge

about how Jesus had changed their lives. My favorite people at these events were the ones who sat right in the front row, singing happily along with us and cheering loudly at our testimonies. I thought more than once that if these people, who had nothing, could muster such enthusiasm for praise and worship, no amount of hardship in my life should ever prevent me from doing so. And the reason? Even when we have nothing, we have everything.

I am a freelance writer by trade, philosopher and comedian by accident of birth. I am an assiduous observer of humanity and endlessly fascinated with people, the common elements that make us human, what motivates people and the fingerprint of God in all of us. I enjoy exploring the universe in my search for meaning, beauty and friendship. My writing is an extension of all these things and something I did for fun long before I ever got paid. My hope is that the reader will find in this portfolio a pleasing and inspiring literary hodgepodge. Good reading!
View all posts by Douglas Abbott →
This entry was posted in Giving, Gratitude, Ministry and tagged alcoholics, clothing, compassion, destitute, drug addicts, feed, food, generosity, giving, grace, homeless, impoverished, indigent, kindness, love, outreach, shelter, street people, vagrants. Bookmark the permalink.

8 Responses to Jesus Loves the Homeless