“Between us and heaven or hell there is only life, which is the frailest thing in the world.” –Blaise Pascal, Pensees

It was just one flake in a blizzard of More Bad News on MSN.com. Police in Illinois broke up a dogfighting operation and commenced questioning 8 men connected to the grisly event. Two men were arrested immediately. Seven dogs were rescued, some of them with awful injuries. Naturally, the reporter supplied plenty of disturbing details, and there was a horrible photo of one of the dogs.

I suppose we need for the media to disseminate these stories. Silence could only permit more of this kind of thing to go on. The compelling question in my mind was: what on earth could be enjoyable about watching God’s creatures chew each other to shreds? But stories like this are fairly common; what was more provocative for me was the dialogue that ensued, from which a broader story emerged. I have reproduced some of the comments anonymously. The exchanges were often dripping with vitriol and hostility. Some of the comments were deleted by the community, presumably because, if it were possible, they were too offensive.

Please God – let there be a special place in hell for people that abuse these creatures of yours and anyone who participates in this torture – Amen [there were several “amens” in response to this wish].

This atheist wants to believe in your god just so this could happen. Amen.

This atheist wants to know why your god doesn’t stop this crap. 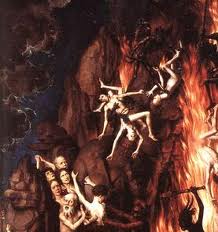 So far this isn’t an entirely unproductive conversation, although it is hostile. We can already spot some interesting positions coming through: the first writer actually wants some people to go to hell. Punishment for sins is proper, but hell (according to tradition) is eternal, conscious torment far worse than the suffering people experience on earth. I couldn’t wish this for anyone. I shudder to think of even someone like Hitler writhing in agony for a billion eons.

The second writer isn’t motivated by remorse or love or a desire for the transcendent to allow the possibility of God’s existence; he only wants to believe because it would mean that Someone could be counted on to slaughter evildoers in the end. Writer three says he doesn’t believe in God, but he is offended that the non-existent Deity hasn’t put a stop to all this evil. Kind of a contradiction, isn’t it? But in all three expressions, there is a cry for someone, anyone, to impose order and restraint on this chaotic world. Good so far as it goes. But we press on:

Yes, unfortunately, there’s no god to do our bidding for us…It’s now in our hands to make sure these sick SOBs get what’s due.

The best part of your Bible is that portion about free will, and when god then kills everyone in a flood for not acting like he wanted them to. 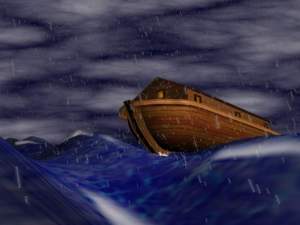 The first of these comments comes from a writer who believes that if God did exist, he would be obligated to “do our bidding for us.” A telling presumption. The second writer criticizes Scripture apparently without having read it. Free will is a phrase that isn’t found in Scripture. It is an ambiguous principle that is inferred from the explicit Scriptures and from visible human history. Nowhere in the Bible or in history is there a basis for the belief that humans having free will means that God doesn’t exercise divine control over the course of human events. We are given freedom to make moral choices, particularly ones that pertain to the ultimate decision: accepting or rejecting Christ. But free will doesn’t mean we can do whatever we want to do. The nephilim found that out when they drowned in the Flood. But now the discussion thread has made the full shift from a dialogue about how to deal with crime to a full blown religious war, and the jabs are getting personal:

You go away first. At least Chad as a point to make. You are just a troll.

You evil atheists! this has nothing to do with God. Leave us alone.

You Christians would be comical if you weren’t so enthralled with pathetic hypocrisy.

It’s understandable that people lose some of their ability to think clearly when they’re angry about some atrocity like this. But many of the combatants in this discussion betray their complete lack of knowledge about the rules of discourse. This is indicative of a broader national deficit. America’s cultural divide has descended into something like a playground rockfight.

A few decades ago, cultural discourse was a serious, respectable endeavor. Those who wanted their arguments to be heard had to earn their voice by displaying knowledge, wisdom and restraint. People who had no credentials, who failed to support their assertions with facts or couldn’t bring themselves to show respect, were not taken seriously. There was accountability.

Then our cultural discourse was harnessed as a profit enterprise and became another arm of the entertainment business. Whole industries (talk radio, talk shows, social media) sprang up to absorb its lucrative savagery. Now much of our cultural discourse is Jerry Springer writ large. A great portion of our population has lost the ability to reason. Many of us now seem to believe that superficial impressions tell us everything we need to know about the issues we so passionately debate. We live in a world of 60-second sound bites where our opinions often get air

These are not original observations; all this has been going on for some time. And it isn’t as though we don’t have real cause to be angry. We just don’t know what to do with our grief. Real tolerance (not the liberal, shifting-truth variety) and respectful dialogue take too much work and don’t yield the kind of immediate satisfaction we can derive from insulting our intellectual foes. Moreover, as a people, we are living on perpetual fast-forward, so often acting or speaking before we have thought things through.

It occurred to me as I was reading this dialogue that there was a great incongruity in all of this. Here was a group of people who came together to deal with their feelings of pain and anger over a senseless crime. But instead of dealing with the issues at hand, their discussion quickly degraded into personal attacks. There is a phenomenon in social psychology called the pain-attack response. If you insert a wire into a cage of hamsters and shock one of them, the offended creature will bite the hamster nearest to it without any awareness of who actually caused its pain. The parallel here is obvious.

The irony! To think of these people posting all these truculent remarks and, in the same breath, expressing such sympathy for the poor beasts who are fighting to the death for the ill-gotten gain of their masters. And these people are themselves embroiled in their own senseless dogfight. So many of them are pouring out ridicule against people and ideas they haven’t taken the time and effort to understand. Precious little of their vitriol is directed at their real enemies—hate, fear, greed, corruption, apathy, despair, pride, folly that demands its own way at any cost; and the devil, who pulls the strings and cackles, as it were. Don’t believe in the devil, you say? A made-up apparition? Which of us can say we have never done wrong with our eyes wide open, caught up in a fever of self-indulgence? No doubt we all have wickedness inside us, but it seems undeniable to me that we are all being manipulated by dark forces that are much larger than we are. To believe otherwise is to play the ostrich.

But this inane exchange, as it turned out, was not without spots of illumination. Some of those who chimed in were trying to bring reason into the discussion. One person, who identified himself as an atheist, asked what the behavior of depraved criminals has to do with questions about the existence and nature of God. (I cheered when I read this.) Others were trying valiantly to get the discussion back on more civilized footing without addressing the non-sequitur attack on religion. But my hands-down favorite participant didn’t make any comments about the pros or the cons or the merits of atheism or fundamentalism or anything else. This person (who went by the name danasellw) inserted the same simple and refreshing message three times into the fray:

God bless you all 🙂

I am a freelance writer by trade, philosopher and comedian by accident of birth. I am an assiduous observer of humanity and endlessly fascinated with people, the common elements that make us human, what motivates people and the fingerprint of God in all of us. I enjoy exploring the universe in my search for meaning, beauty and friendship. My writing is an extension of all these things and something I did for fun long before I ever got paid. My hope is that the reader will find in this portfolio a pleasing and inspiring literary hodgepodge. Good reading!
View all posts by Douglas Abbott →
This entry was posted in Culture Wars and tagged atheism, christianity, crime, culture wars, debate, devil, discourse, fundamentalism, God, religion, rules of discourse, Satan. Bookmark the permalink.