It was the winter of 1994-95. Because of some major rearrangements in my circumstances, I was at a strange juncture in my life and found myself suddenly in need of work. At just the right time, Jack Frost helped my situation immeasurably by dumping an inordinate amount of snow on the city of Anchorage, Alaska. By the end of the winter, we had received 121.5 inches of it. That’s more than ten feet (about the height of your living room ceiling), and it was the third snowiest winter in our recorded history, behind 1954-55 (132.8 inches) and 1955-56 (128.8 inches). I recall how much shoveling I had to do just to keep my driveway clear. It seemed that as soon as I went to put the shovel away after two hours of shoveling, the flakes would start falling again.

At first I was put out by the excessive precipitation. It made driving messy and dangerous. After each nocturnal flurry, the sun would rise to reveal a dozen cars that had slid off the roads during the night. My shoveling was becoming increasingly difficult, since the snow banks on each side of the driveway were getting higher with each new snowfall, requiring more strength to throw the snow over them as I worked. But at some point, I began to marvel at what was happening. The houses and streets were being swallowed up by the snow. I wish I still had a photograph I snapped one night from my living room. The driveway and street looked like one great, pure-white cotton candy display. Eventually, the municipal crews had to go around shaving the tops off the snow banks so drivers could have visibility. I had never seen them do that before.

The excessive snowfall created work for me by jeopardizing the roof of every building in town. You can only get so many feet of snow on a roof before the weight of it, as well as the runoff from melting, begins to seriously damage the roof. Knowing this, I went door to door asking the neighbors if I could shovel their roofs. By the middle of the winter (and several feet of snowfall), it was an easy sell, and I found myself in constant work. After doing a couple of roofs the hard way (with a regular snow shovel), I discovered a tool called a “sled,” which was basically a giant shovel with a large handle like the push bar of a lawn mower and a scoop the size of a small desk. With the sled, I found I could do the work three times as fast, although it was more dangerous; to use the sled you had to get a running start, get the blade under the snow, and push a huge mound with unbroken motion until you got close enough to the edge of the roof to where the momentum would carry the snow over the edge and to the ground. To keep from sliding off myself, I had to screech to a stop at the end of each push. Nevertheless, I nearly slid off a few times as I worked. I also gave myself tendonitis in one leg from the repetitive stress of stopping suddenly over and over. To this day, the pain flares up occasionally.

One day, as I was scouting out new jobs, I knocked on the door of a house on Oxford Drive. An elderly gentleman named Leonard answered the door and, after we’d had a brief conversation, agreed to let me shovel his roof for $100. I did the job two days later, starting as soon as the sunrise had begun to reveal the roofs of the houses. Leonard’s house was not overly large, and the pitch of the roof was manageable. I had become adept at the work and enjoyed the exhilaration of the vigorous work. I even liked the feeling of being spent from my exertion at the end of each day.

On the day I shoveled Leonard’s roof, my hands started to become very cold around the middle of the day. It had cooled off significantly, and the gloves I had been using all along were of little consequence. But Leonard rummaged through his things and came up with a pair of very thin gloves made of some metallic material (the type worn by astronauts, he told me) which were meant to be worn underneath regular gloves, and which I could keep. Sure enough, my hands warmed up nicely.

By four o’clock, I was finishing the work when Leonard poked his head up from the porch and asked me how I was faring. When I told him I was done, his features brightened. “You must be pretty cold after all that shoveling,” he said to me. “Why don’t you come in and warm up with a bit of hot chocolate?”

His offer was inviting, and soon I was sitting across from him at his kitchen table, my hands wrapped gratefully around a steaming mug. I looked around, taking in the details of his comfortable home. It was clean but not immaculate. The articles of his daily life were sprinkled around throughout the living room and dining area. There was a large bookcase prominently placed in the living room and half-read books on most of the surfaces. The kitchen was well-used, and the refrigerator was covered with poems and photographs of family and friends.

Leonard was a widower, and I got the sense that he must not often have occasion to entertain visitors. My rooftop ministrations had given him a perfect opportunity to show some hospitality. We spoke at some length as I drained my hot chocolate and received a refill. My host was pleasant and sociable, and we talked about all kinds of things as evening fell outside the windows.

The conversation took a sharp turn when Leonard disclosed that he had been a fighter pilot in the Air Force during World War II. Up to then, our visit had been pleasant but not particularly stimulating. Now, suddenly, our casual visit had been transformed. Here was a man who rode on the wind fifty years before, with artillery shells exploding about him and the whine of bullets in his ears, doing somersaults with his plane while bellicose Germans did their best to blast him into oblivion. Nevertheless, here he was, alive and well, and for all the lethal aggression he had endured half a century before, he was a remarkably calm and kindly soul.

A twinkle came into his eye as he told me that he had flown a P-51 Mustang in all his combat missions. His skill as an aviator was fierce, and he had an edge not many pilots even knew about: he had removed the throttle stop from the console of his plane. The

stop was a standard governor found in all the Mustangs that was designed to prevent the pilot from over-accelerating during combat. A few of Leonard’s comrades knew he had removed the governor, and they exhorted him to put it back on before it was too late. “You’re going to blow yourself up!” they said to him more than once. 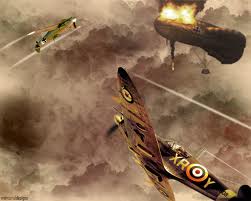 But Leonard knew his plane like a lover, and he clearly possessed the rare gift of composure in the face of grave danger. Moreover, he wanted that bit of extra thrust to outmaneuver the Germans in the air. And that’s exactly what happened, I thought as I visited with him. Here he was, healthy and whole, enjoying his retirement in peace after cheating death countless times so many years ago.

I thought about the fact that many of life’s richest experiences lie hidden in out-of-the-way places. Often we end up in those places not by choice but because we have been forced to go there by some overwhelming circumstance. I hadn’t chosen to have my city buried under ten feet of snow. I wouldn’t have opted to go up on dozens of roofs, risking injury standing in waist-deep snow, my hands numb with cold. If I’d had my choice, I would have set myself up with work that was warm, dry, less strenuous and more lucrative. I wouldn’t have made my living contingent on the responses of complete strangers when I knocked on their doors. But that’s the way it happened, and as a result I found a different kind of pleasure in pushing huge piles of snow off roofs as the chill nipped at my cheeks and birds all around made their esthetic statement to the sky. I enjoyed an encounter with a soft-spoken gentleman who regaled me with tales of death-dodging high adventure. This was life at its best. Thank you, God, for making such a wonderful world.

I am a freelance writer by trade, philosopher and comedian by accident of birth. I am an assiduous observer of humanity and endlessly fascinated with people, the common elements that make us human, what motivates people and the fingerprint of God in all of us. I enjoy exploring the universe in my search for meaning, beauty and friendship. My writing is an extension of all these things and something I did for fun long before I ever got paid. My hope is that the reader will find in this portfolio a pleasing and inspiring literary hodgepodge. Good reading!
View all posts by Douglas Abbott →
This entry was posted in Accidental Blessings and tagged beauty, blessings, happenstance, heroes, hospitality, random, unexpected. Bookmark the permalink.