Posted on September 9, 2011 by Douglas Abbott 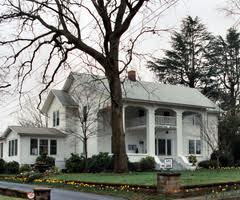 It turns out the subject of Adventure House is a storehouse of great old memories. At the risk of uttering a cliche, it was a simpler time, not only because it was 1983, but because I was 15. Life is a great deal less complicated when you’re a teenager. I think about how fortunate I was to have the experiences I had, to have people around me who were trying to help steer me in the right direction.

One of those people was Jimmy Bell. He was one of the Adventure House staff, a relatively young black man who possessed quite an agreeable disposition and enjoyed himself with the guys in the program. There was a resident there named David who loved basketball, and every morning the two could be heard in the driveway playing one-on-one. Occasionally other people joined in, but David and Jimmy never missed a morning.

Even a cynic like me couldn’t help but trust Jimmy. He exhibited real concern for our well being. He demanded respect without throwing his weight around. One week I decided to reach out to him. I had been depressed and restless and getting into a bit of trouble. My points sheet was looking scarred. By now I was known for wild mood swings with accompanying unpredictable behavior (it was why I was in Adventure House to begin with). David jokingly referred to me as a “walking minus point.” But I was weary of the desperado lifestyle. It was spring, and I felt the irrepressible vibrations of new life all around, as though emanating right from the ground. All of a sudden I wanted to do something positive and noteworthy.

I approached Jimmy and told him I was going to turn over a new leaf. I was tired of misbehaving and all the ensuing repercussions, having to face the disapproval the staff, who were actually quite likable people when you weren’t breaking rules. I was going to be a new man, and to prove it I was going to break the all-time record for the highest weekly point total.

Jimmy was enthusiastic. “I’m glad to hear that, Doug. When are you planning on cinching the record?”

It was about the middle of the week, and I used the rest of the week to “rest up,” knowing that the following week was going to be strenuous.

Unfortunately, by Monday I was still resting. As was my habit, I blew hot and cold all the time, and the chips fell wherever my mood did. I hadn’t exactly dismissed my plan, but I wasn’t feeling confident or energetic about it. By Wednesday morning, I had lost a few points here and there and no longer considered myself in contention to beat the record. I wasn’t even interested anymore.

But Wednesday was Jimmy’s Monday, and he arrived back to work bright and early. He spotted me in the hall on his way in and gave me a big smile and a greeting.

“Hey there, Doug! Good to see you. It’s a great morning. Let’s get after that record!”

I didn’t know what to say. Somehow I couldn’t bring myself to tell him, “I’ve decided not to go for the record.” But I felt absolutely run dry. Whatever breaking the record might require, I was quite sure I didn’t have it in me. Moreover, I was already behind the eight ball, having blown off two days and lost points in the process. Nevertheless, I didn’t have the heart to tell Jimmy I had given up. He was so enthusiastic, so obviously interested in my plans and how I would fare in pursuit of them.

So I went ahead with it, launching myself fully into the task at hand. I behaved impeccably. I followed every rule, written and unwritten. I was polite and respectful toward the staff and the other residents. I did my chores conscientiously and volunteered to wash windows and do other jobs around the house that needed doing. I put in an hour or two on extra chores each day for the rest of the week. The points added up, and soon the plus points vastly outnumbered the few minus points I had gotten at the beginning of the week.

Then, finally, it was Monday again, time to see how things had turned out. Right after school I came in the door and headed for the office on the double. I had a strong feeling that I had probably succeeded. I had behaved better that last week than any other week of my young life. I learned later that at the outset of the week, Jimmy had spoken to the other staff in their weekly meeting, telling them that I was turning over a new leaf, that I was going to beat the points record. I have some vague recollection of hearing that when Jimmy made this announcement, there were smirks on the faces of some of the staff. My reputation had preceded me.

The previous points record had been 403, an accomplishment that had seemed noteworthy enough to warrant bringing the resident, John, into the office and praising him in front of all the staff. I didn’t get to enjoy that particular form of recognition, but what I got was more than good enough. I had earned a total of 433 points. They actually changed the points system after that, although I don’t know if it had anything to do with me.

It’s ironic to think about the fact that I wasn’t even going to go through with it because of a sluggish start. I surely wouldn’t have if it hadn’t been for Jimmy. I suspect he knew that Wednesday morning that I had gotten off to a bad start, but he didn’t care. He wasn’t going to let me make a personal commitment and then discard it nonchalantly, particularly since I had made a contract of sorts with him. I love him for that.

I’ve met some vile characters over the years, but they’ve been balanced out by the ones like Jimmy Bell. Many people carry themselves through life as though honor, nobility and truthfulness don’t matter. When such people are in a position of authority, this kind of amorality is passed on like a disease. For some reason I can only speculate on, God saw fit to put characters like Jimmy in my path when I was growing up, people who spoke and acted as though there were no reason to expect ignoble comportment from anyone, cultural decline or no. That’s moral authority.

I am a freelance writer by trade, philosopher and comedian by accident of birth. I am an assiduous observer of humanity and endlessly fascinated with people, the common elements that make us human, what motivates people and the fingerprint of God in all of us. I enjoy exploring the universe in my search for meaning, beauty and friendship. My writing is an extension of all these things and something I did for fun long before I ever got paid. My hope is that the reader will find in this portfolio a pleasing and inspiring literary hodgepodge. Good reading!
View all posts by Douglas Abbott →
This entry was posted in Honor and tagged culture, honor, nobility, reputation, respect, righteousness, truthfulness. Bookmark the permalink.